These keto glazed donut balls are the best way to satisfy your doughnut cravings while eating low carb! They're perfectly soft, moist, buttery and coated with a classic vanilla glaze.

Everyone loves donuts but they're not exactly low carb. Traditional doughnut balls contain 7 grams of carbs each which would kick your body out of ketosis with just a few bites!

But don't worry, we've put together this mini donut bites recipe with each delicious ball containing less than half a gram of net carbs.

With everything you love and want from a doughnut including a moist, doughy middle, crispy exterior and classic vanilla glaze!

For these delicious low carb donut balls you'll need to grab the following.

For the Vanilla Glaze

We've had some questions regarding the amount of almond flour used in this recipe.

The amount of almond flour is correct, the only way to get the donut balls to be so moist inside is to use less flour and be precise.

It's also very important to allow the dough to rest to reach the desired consistency.

How To Make The Balls

Preheat your oven to 430 degrees Fahrenheit (220 degrees Celsius) and line a baking pan with baking paper.

In a pot melt the butter over low heat, add the vanilla extract and then fold in the flour mixture.

Mix constantly to incorporate all the ingredients and keep mixing with a spatula or wooden spoon for 2 to 3 minutes until a dough is formed (add a little water if needed, one tablespoon at a time).

The dough has to rest to develop the desired consistency due to the lack of gluten. The dough should be easy to shape into balls that will hold their shape.

Transfer the dough into a bowl and let it sit until it reaches room temperature.

Add your egg to the dough once it has reached room temperature, and combine with an electric mixture until an elastic dough is formed.

Cover with a towel and let the dough rest for 15-20 minutes.

Shape your dough into bite-sized balls and place them on your baking pan lined with baking paper.

Sift your powdered Erythritol into a mixing bowl and gradually add the heavy cream, vanilla extract and water (if needed) until you get a thick and pourable glaze.

Roll your donut balls in the glaze and place on a serving plate. Feel free to drizzle any remaining glaze over the donut balls and enjoy them!

The best way to store your donut balls is in an airtight container at room temperature. If you freeze them they're going to dry out and spoil faster. They'll keep for up to 4 days at room temperature just make sure you keep them away from heat and moisture. 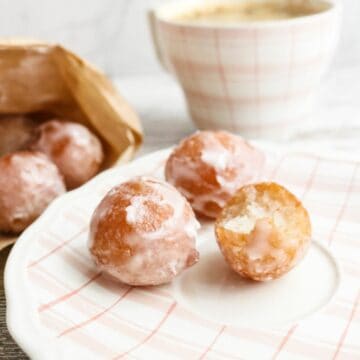 Soft, moist, buttery and light as air, with a delicious meltaway texture and a classic vanilla glaze these are even better than the conventional donuts.
Pin It Print
Prep: 10 minutes
Cook: 30 minutes
Resting: 20 minutes
Total: 1 hour
Servings: 10

For the Vanilla Glaze

To Make the Donut Balls

To Make the Vanilla Glaze 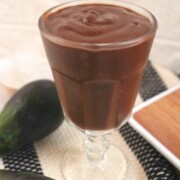 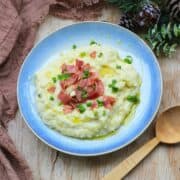 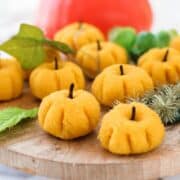 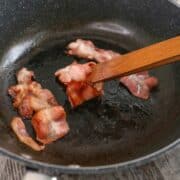